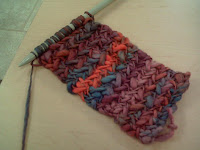 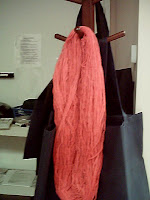 Last Saturday was quite quiet in the store, as Saturdays often are in the summer, so I got a chance to play. I brought in my embarrassingly beaten up crockpot and some Kool-Aid (4 packs of cherry, for those who want to try it too) and followed the directions for Kool-Aid dying that I had printed from Knitty.com and spent the morning watching the whole mess do nothing much...until it obviously hit the heat level that was needed to absorb the dye. Then like the magic that can come from Hermione's wand, the water was suddenly almost clear and the the red dye was in the wool.
The picture of the skein hanging is not really all that accurate as to colour, it's actually quite a lovely uniform very rich coral colour. Next Saturday I plan to try Topsy Farm's premium super fine wool and Blueberry. It's really fun to find things that can astound you, just like when you were a kid.
As I mentioned, the crockpot's contents didn't do much of anything for the first couple of hours so I was working on a pattern that I had seen before and had intrigued me for quite some time. "My So Called Scarf" comes from the Sheep In the City site (you can link to it from the "Other great blogs & links "section to the right) but from her description of its origins, it sounds like it might have come from a Barbara Walker collection from way back. The scarf from the site is done with Manos del Uruguay wool but I had one last skein of this great colour of Wooly Bully left and wanted to see if the thicker yarn would look good in the woven texture. Well as you can see, it's a great combination. One of the nice things about this stitch is that it keeps you focused without requiring too much brain power. The other great thing is that although both sides look quite different, there really isn't a right/wrong side, and better yet, it doesn't curl as most stocking stitch derived patterns can.
The customer who sent me the pattern had used this stitch for a band around a hat. It would work equally well as the cuff of mitts or as a purse, or anything. It's a great pattern stitch.

Despite the fact that the weekend can be a bit relaxing at the store at this time of year, we've been busy during the weeks with the pre-inventory sale and next week we get to prepare for the Big Count after our final BUY THE BAG sale week.
But more about that later.