I thought that it was supposed to be a LION and a lamb that lay down.

So this afternoon I was going through my email and had received notice of a new book being published in Britain on the social history of knitting in the past decade or so. Interesting as that could be, the subject matter paled in comparison to the picture that they featured as part of their book. It showed an adult elephant wearing a knitted (or perhaps crocheted) coat, similar to a dog's coat. Now, as I am committed in this blog to find and share things from the knitting world that I find of interest, I couldn't let the elephant coat go. So I started searching Google for the original picture for some background from where it might have come. Well, I guess I'll have to buy the book as I wasn't able to come up with anything...but look what I found: Themba, the elephant and Albert, the sheep. Follow this link to read about their strange friendship and to see more pictures. http://geniusbeauty.com/cute/baby-elephant-adopted-sheep/cute/baby-elephant-adopted-sheep/ 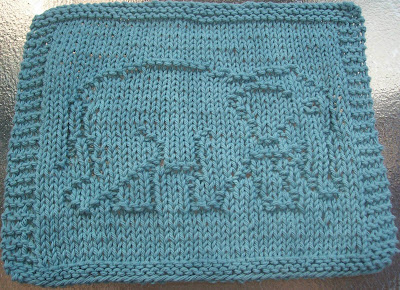 Also, while looking up "knitted elephant coat" I came up with this dishcloth pattern, which can be purchased for $2. at http://digknittydesigns.blogspot.com/2009/07/elephant-knit-dishcloth-pattern.html

And although I didn't find the actual picture of the elephant wearing the coat, perhaps we have a clue in this cartoon as to who the crafty lady was who produced it? Papa elephant doesn't look to happy about waiting for his new knitted garment.
http://www.agoodyarn.net/KnitImages2.htm

Enough about elephants: Google being what it is, I could spend the rest of this year telling you about 212,000 pictures that I found in .11 seconds that referred to "elephant knitting."
This is the other activity that has been keeping me occupied for the past few weeks. This is a picture of a basket of "Goodie Bags" that we've prepared to bring to the spring conference of Ontario Hook Craft Guild members, taking place at the end of April in Cobourg. We made up 300 hundred of these bags, each containing 5 strands of fun yarn that can be incorporated in a rug hooking project.

The idea is to let the rug hookers of Eastern Ontario know how much fun it can be to have a world of spun fibres at your fingertips, ready to be worked in to their latest creations and also that WOOL-TYME Kingston is now offering a whole array of rug hooking supplies.

So for those of you who think that the life of the staff at a knitting store is the essence of creative bliss, consider the 12.5 person/hours required to cut and assemble 1500 of these skeins, the sheer blind confusion of trying to sort them into groups each containing 5 coordinating colours, and the extra 10 hours to bag and tie them and get them ready for transport to Cobourg next week. But I'll let you in on a little secret: I love this kind of mindless drudgery...Reminds me of the years when we (my kids and I) would fold, address and mail over 1 000 copies of the paper newsletter at least 3 times a year.
According to an article in the March issue of O(prah) Magazine, a Harvard affiliated study found that "repetitive motion and focus of needlework can elicit what's known as the relaxation response, a calming meditationlike state." Perhaps it refers to the repetitive motion of putting little skeins in bags too.
Posted by Now: KnitTraders of Kingston at 6:51 p.m. No comments: