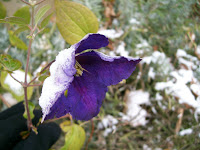 This is a flower on one of my clematis bushes. It lives next to an overexuberant clematis of another breed that is way too showy and cannot be tamed. This darker coloured clematis is the weaker of the pair and despite being the same age, is about 10% of the size of its neighbour, and produces about 5% of the flowers. It did however decide to put out one single flower during our warm spell earlier in the fall. Then it snowed . Isn't it pretty despite its lonely vigil over my abandoned front garden?
It's interesting to think of what we find beautiful. One of the sales reps for a major supplier was in the store yesterday so that I could check out the spring lineup and do some ordering. He was saying that it took awhile but that the design department had finallly figure out that knitters will drool over handpainted colours in any fine yarn, but that when it comes to the thicker yarns, they prefer the solid or heathered colours. I had to agree. And I always like to analyse responses, but darned if I can figure out our drool reflex in front a glorious skein of multi hued lace weight yarn and our gut response to a gorgeous skein of the purest colour of solid rich grey in Cascade 220; and conversely, how the opposite just doesn't say very much to us. (The obvious exceptions to this rule are all the Noro yarns and the Manos del Uruguay handpaints, which of course are just simply exquisite, no matter how thick they are.)
I'm working on the newsletter and had to take a break (I do believe that it's called "procrastination"). The other day I finished a great felted tea cozy on which I needle felted the cutest details. This is for my oldest daughter for Christmas. When I get the battery charged in my c 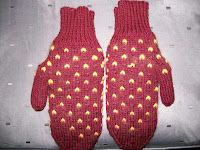 amera, I'll have to show you a picture if you promise not to tell her.
Last night I finished these thrum mitts. The colour in the picture is a bit bright but they are in fact burgandy and gold, which I beleived to be her school colours. I did have a nagging suspicion however that this was not completely accurate as I had just heard of the school colours through her, followed by the disclaimer: "I think". So this morning, as I was getting ready to put them with the other gifts that I've finished, I looked it up on the internet, and sure enough, the colours for her University are in fact burgundy, gold AND BLACK.
Now I certainly could have looked this bit of information up the same way, and in the same 10 seconds worth of time investment, a couple of weeks ago when I began them and I could have included black with the yellow thrums instead of burgandy and yellow ones. But that is my nature; for some reason I feel that it's more important to get on with the job at hand and tidy the details, if necessary, later on.
In this case, I'll probably do a bit of duplicate stitch to add some black around the cuff. It's not the end of the world, but it certainly is a good thing that I'm not a perfectionist or a slave to the sequential order of things.
P.S. As if to further illustrate my need to get on with the job and worry about details later, when I published this post originally, I looked at the page as it showed up on my screen and couldn't figure out why it looked so different from my other blog posts, until I realized that I had written it in our Free Pattern website: www.wtkpatterns.blogspot.com This goes to show that I've become really good at fixing problems as it's only taken me another 5 minutes to move it over here. I've also learned a lot about serenity in my life, and how to keep from hitting my head against a wall when I make a mistake.
Posted by Now: KnitTraders of Kingston at 8:55 a.m. No comments: