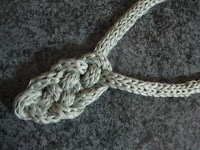 This was a snow day and I was at home all day.

Actually most Wednesdays I get to spend a good portion of the day at home working at the computer, but somehow with all that snow blowing around outside, and my husband home from work, it felt kind of special. Like I couldn't do anything outside the house even if I wanted to, so I might as well have fun and finish up/get along with some of the knitting projects that have been hanging around for a while.

The first project to tackle was the meter of I-cord that I had made over the Christmas Holidays, using some linen that we've had at the store which didn't seem to be saying anything to me. Then I saw an article in the winter Vogue Knitting Magazine that showed how I-cord could be twined into a beautiful celtic knot and worn as a necklace. Isn't it beautiful. Tomorrow I'm off to look for a clasp to sew onto the ends of it. 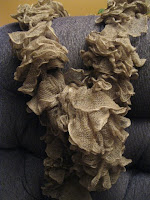 Next was finishing the last few rows of the TUL scarf. TUL is the newest frill type scarf yarn from Katia, made of combed cotton and nylon. It's beautifully soft to work with and comes in lovely spring colours. I can see it for cuffs, neck trims, bag adornments as well as scarves. Now, that's project #2 down.

WOOL-TYME Kingston's first ever Knit-Along featuring the February Lady Sweater got underway last night at the store with a great turnout despite the weater and sadly, without me. As I was backing out of my driveway to go to the event, I rammed right into a giant snowbank and there sat my car until it was too late to make any sense of heading in to the store. That actually doesn't have much to do with anything except the fact that I'm pouting a bit for having missed the kick off, but it also serves as a segue to the next project that I was working on today: an afghan square for next fall's proposed Knit-Along: a Blocks of the Month Afghan. 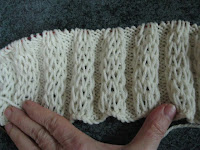 Last week I wrote of how I enjoyed working on afghans so much, and although I've got 2 great knitters and friends working up most of the squares that we intend to incorporate into this project, both of them are working on their F. L. S. for this Knit-Along, so it seemed as if it would be a good opportunity for me to do a couple of the squares myself. This is called a Loop Stitch Rib and is really easy yet quite impressive looking. 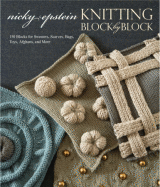 Later in the day I got a chance to go through some of the new books that just arrived on Monday. What a surprise to find that Nicky Epstein's new book: Knitting Block by Block was a perfect summing up of all that I got to do today.

Nicky is known for her amazing creativity and for seeing knitting in a very 3 dimensional manner. This book of knitted blocks includes just about anything that you can imagine as shown on the cover: I-cord, beads, pieced work and good old stitch variations. Each of these blocks can be used by itself as a pillow cover for instance, or in combination in a shawl of an afghan. I particularly loved the applied I-cord squares. Perhaps I was just trying to figure out a way to use the rest of the linen I-cord that I have left over from my necklace.

Anyway, it's a lovely book. Every page had me thinking of applications for each of her great designs. So many ideas...so little time. But it sure is fun to look at them and let them settle in my brain. Maybe one of those ideas will hatch a concept for Knit-Along 2012.
Posted by Now: KnitTraders of Kingston at 7:12 p.m. 2 comments: