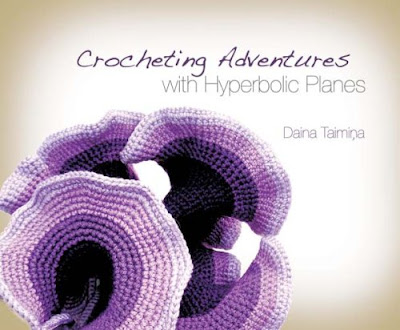 Last week I heard on CBC Radio that the winner of Britain's Diagram Prize for the most unusual book title of 2009 is: Crocheting Adventures with Hyperbolic Planes by Daina Taimina. Daina was a mathematics professor at the University of Latvia for 20 years and has now been at Cornell University for the past 10 years. She also crochets objects to illustrate hyperbolic space and makes truly appealing books about them. Follow this link to see more examples of her technical/beautiful work.
http://www.math.cornell.edu/~dtaimina/hypplanes.htm

So, living as we do in a world where every piece of information is about 2 minutes away with the help of GOOGLE, I wondered what other math and science minds had turned their techno brains to yarn crafts and WOW, what a treasure chest is out there.

The Yarn Theory Project was an art exhibition in 2009 which explored the relationship between knitting, crochet, mathematics and science. It operated out of an old public school, turned into a community art gallery, bringing art to the city and the city into the studio.

In areas of Britain, breast feeding clinics had found themselves short of expensive models of breasts for demonstrations. They issued a plea to knitters and patterns were made available for breasts of varying shapes and sizes from the Lactation Consultants Association of Great Britain. This is a picture of Audrey Horncastle who at 84 has found a whole new way to make her crafts valuable to the community by knitting "boobs" for the group.
Where there's a will, the knitters have a way of solving any dilemma. Link here for the pattern.

Follow the link below for more examples of the collisions between craft and science, such as a knitted brain, a view of the nature of the chaotic system with 25 500 stitches, a womb, the digestive system.
http://www.ox.ac.uk/media/science_blog/090127.html

And most beautiful of all, is the Crocheted Coral Reef Project, which will be exhibited at the Science Gallery in Dublin until June 2010.
From the Crocheted Coral Reef site here is a description of the project:
"One of the acknowledged wonders of the natural world, the Great Barrier Reef stretches along the coast of Queensland like a psychadelic serpent, a riotous profusion of color and form unparalleled on our planet. But global warming and pollutants so threaten this fragile monster that scientists now believe the reef will be devastated in coming years. As a homage to the Great One, IFF directors Margaret and Christine Wertheim instigated a project to crochet a woolen reef. The sisters, who grew up in Queensand, have been spearheading the project since 2005, quiety watching as it has morphed into an unexpected and far-reaching wordwide movement. "

Check it out. It's almost worth the trip to Dublin just to witness how our lovely yarns can be made to emulate nature.
Posted by Now: KnitTraders of Kingston at 11:47 a.m. No comments: