The Assiniboine Valley is too beautiful to waste on a straight highway. 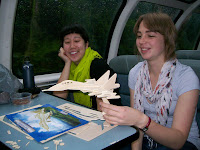 For some reason, I've been really surprised by the friendliness of all the passenger and staff on board. But if you think about it, spending 80 hours together is a bit like being on a cruise where people will start chatting just to satisfy their curiosity about each other.

At first it began with the younger ones getting together and staying up way past when the rest of us had tried to get some sleep But as we passed the half way point between Toronto and Vancouver, we all started looking at each other as potential chat buddies. These girls had 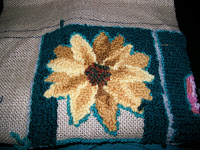 brought some very creative activities to pass the time in the dome car. This was their balsa wood model plane. Later in the day they brought out wax crayons and mini colouring books.


Needless to say, the toe up socks and the rug hooking that I've been working on have attracted some attention along the way but now people are stopping to watch and ask about what I'm doing instead of just shyly passing and mentioning that they liked it.


A young woman from the Niagara area, whose boyfriend had borrowed my scissors the day before while they were working on woven friendship bracelets of embroidery floss, was telling me something interesting that she has learned during her Midwifery program where she is enrolled at McMaster U. It would appear that there is a nurse-midwife in Britain who has made it a part of her practice to knit during the labour and part of the delivery of her patients, only putting down her needles in an emergency. The theory is that by knitting, she creates an atmosphere of calm and mild detachment, believing that nature is capable of leading the way and assuring the mothers that they will able to follow what their bodies are prepared to do.

Her success and satisfaction rates are apparently phenomenal. It puts a new twist on Elizabeth Zimmerman's perennial edict to: "Knit on with confidence and hope, through all crises." 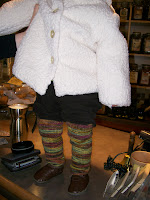 This is a picture that I took of a little girl that I saw during our stop over in Winnipeg. What first caught my eye was her little white coat which actually has a sheep hood and is a cute as can be. But then I saw her beautiful fingering weight leggings. The Mom said that her best friend made them for the little one and although she herself can't knit, she certainly appreciated the knitted gifts that this good friend likes to send.
We can't all be creators. Grateful recipients are important too!
Posted by Now: KnitTraders of Kingston at 8:35 a.m. No comments: