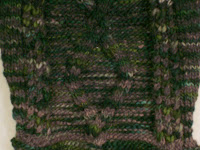 Last Saturday I was lucky enough to take a wonderful workshop on digital photography aimed specifically at artists and crafters who are needing to take accurate yet appealing pictures of their projects and designs. The picture at left is actually very accurate for colour, and despite the sombre tones and mixture of 2 multi hued yarns, it still shows up the cable designs relatively well. And I was able to achieve this effect in about 3 minutes of picture taking and 5 minutes of uploading and "tweaking". All the knowledge of the world is out there, just waiting for us to find the time to take advantage of it. How fun...
Actually aesthetics aside, this is a picture of the first of 2 sleeves that I had set myself to finish during the Olympics. I'm about 1/3 of the way through the second one, so I may even shoot past my mark. Would that be like a downhill racer who makes it across the finish line and keeps right on, barreling through the crowd? Or the short track speed skater who continues doing laps until they are dragged from the oval? Oh well, whatever gets me to the ultimate goal of finishing the sweater before the summer.
It's a sweater for my brother who will be 50 in September. He lives in Victoria and likes the outdoors. I love the brown/green mixture of blending the 2 yarns, and how it makes the cables almost a secret that you have to look for and follow to fully appreciate.
Speaking of the West Coast and the Olympics, is it just me or is the coverage a bit less exciting this time. On the other hand, have you ever heard O Canada with such force as it was sung at the ceremonies for Alex Bilodeau's gold medal?
My daughter had to tell me that this strange couple who do the interviewing in the morning on CTV (she looks like she just walked off a shoot for Vogue and he looks like he's trying to channel Roy Orbison) were actually meant to be funny. I just thought they were silly for real.
Well as I'm committed to a certain amount of television watching in order to complete (and perhaps exceed) my goal, I was channel surfing last night and came upon the coverage on APTN (Aboriginal Peoples' Television) and was delighted to hear that one of the Canadian men's hockey games this weekend will be broadcast in Cree. At 8pm they switched from English to French reporting and they said that they were thrilled to be presenting the women's curling between China and France (I think) and they were predicting a great match. It reminded me of the episode of the Mary Tyler Moore show (for those of you who remember it) when the newsroom hired a lovely young woman as a sports announcer who glossed over NFL scores and gave maximum story time to an up and coming young female diver.
That to me is what makes the remote control and satellite television such a bonus, you can find interesting coverage where you can hear hockey broadcast in Cree and see how China interprets Canada's second favourite sport: Curling.
For those who haven't made it in to the store for our SWEETHEART SALE, there are still a few days: Buy 4 balls of any of our regularly priced yarns and you get the 5th ball FREE. It's a great deal on whatever you want. Hope to see you before Saturday.
Posted by Now: KnitTraders of Kingston at 9:11 a.m. No comments: