Do you remember the Eyelash yarn?

To be quite honest, we had eyelash yarn in the store for a year and a half before the craze caught on. We used to have it in a little basket, with about 2 balls of each of the 7 or 8 colours that we carried. We had one customer who loved it and made quite a few projects of all sorts with it. It seemed as if she was the only one who had any interest in buying it even with the cute little bolero jacket that we had on display.
Then the TSUNAMI of popularity hit. It was not uncommon on a Saturday to have a half dozen customers picking up 30 balls of this yarn, not to mention the 30 customers who were there to pick up a half dozen balls. There were some days when we could have auctioned off 2 balls of black FUNNY that were returned for 5 times their regular price.
My favourite business story in the 14 years that I've had the store is of an older woman who won the Best in Show prize for knitting at one of the local fall fairs where we had donated a $25 gift certificate for the prize. She had never been in our store and arrived with 2 of her adult daughters to see what we carried and to spend the gift certificate. They all fell in love with the eyelash yarn and I finally lost count of how much return we made on that "donation" but between this lady and her friends and extended family at least 250 balls of eyelash yarn were purchased that season.
Enter F

RILL SEEKER and the other frill yarns that have taken over.
Again, we had an identical yarn in different colourways 2 years ago in the store, and again we had one forward thinking customer who loved it and was responsible for about 75% of the sales that we made when we carried SOLO in the store. But for some reason it just didn't catch on until this season.
And predictably, there just isn't enough stock. How can anyone predict what will go "viral" in the knitting world, or any other aspect of life for that matter?
I was at the distributor's warehouse last week and heard that they had invested $6 000 to air ship a tonne of FRILL SEEKER yarn to Canada. That is one heck of a lot of frills. Last week we received 32 bags of that lot and have but a few balls of just 3 colours left. More is coming later in the month, this time by ocean freight (sensibly), and yet another shipment is expected with new colours to arrive before Christmas.

It reminds me of the Cabbage Patch Doll craze, where my mother, God bless her, fought the crowds at the Bay on Rideau St in Ottawa to get one for Christmas for our oldest daughter, who drew on the doll's face some time in early January. And bless her in turn, Catherine just wasn't a doll kind of kid.
Anyway, this new one is a fun yarn and a nice gift. (Apparently, FRILL SEEKER scarves were spotted by one of our customers in Mont Tremblant fashion boutiques and are selling for $50.)
At right is a picture of RIZOS, by Katia, another version of the frill yarn and a bit more sophisticated. We will have a bit in stock but I had to fight to get 2 of the last 4 bags in the warehouse where it is housed. The knitting world can be a tough one. It's good to know that our customers appreciate the battles that we face to get the yarns they want. LOL.
Posted by Now: KnitTraders of Kingston at 8:34 a.m. No comments:

A bit too much knitting, perhaps.

I've loved knitting all my life. I was quite young when daydreams often consisted of how to make a knitted swirl go around a sleeve. But I have to say that even for me, the wallpaper in this hotel room might have been a bit overwhelming.
Joanne, one of my customers, brought this photo back from a trip to Ottawa recently where they stayed at the Hotel Indigo. Having recovered from the shock of finding an entire wall covered with a mural of a sweater that I owned in the '70's, I was intrigued as I'd never heard of this hotel before, having worked at the Chateau Laurier in my early twenties, and Ottawa being my second home.
When I looked it up on-line, I was taken aback on several fronts. First of all, it would appear that this pretty upscale "boutique" hotel has this type of mural wallpaper in all their rooms. The ones that they feature on the web site have you sitting in a forest of birch trees, or in a much-larger-than-life field of wheat.
Secondly, I was blown away when I realized that the Hotel Indigo is actually the latest incarnation of what used to be the old YMCA, which is right across the street from the old YWCA, and is the corner where my brother, Andy and I first found our Independence when we were but 7 and 9 years old.
We were the oldest of 5 kids and with one car and a Mom who never did want to have her driver's license, we were shown the way then allowed to go to swimming lessons by ourselves, taking the 35 minute bus ride over from Hull in Quebec, getting off at the Chateau Laurier, walking along Wellington to the front gate of Parliament Hill, then turning south on Metcalfe St and walking down the 6 or 7 blocks to our respective Ys. We never looked back. Andy has traveled extensively in Asia and has been on just about every continent on this planet. Although I haven't been as far afield, I have an instant sense of comfort in any city that I've ever visited, and independence is my middle name. 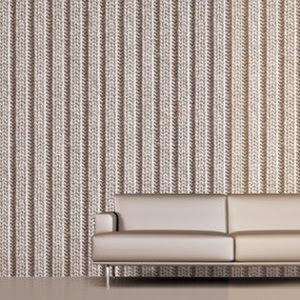 But can you imagine? Today, I believe that allowing your 7 and 9 year olds to take the bus alone to another province is considered a chargeable offense. Children's Aid would no doubt have something to say about it.
Everyone at the class was pretty amazed by the Hotel Indigo wallpaper and wondered aloud what percentage of the people who were assigned that particular room were knitters? Could you actually request a room with a particular scene? Anyway, in the way that life would have it, Alana came across this other version of knitted wallpaper the very same week that Joanne brought us the picture. I'm not big on a white on white colour scheme for my house for obvious reasons, but I must say that there is something much more appealing to me in this warm and balanced MEGA ribbing.
Posted by Now: KnitTraders of Kingston at 3:37 p.m. 1 comment: