The Season for Blankets 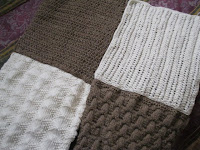 I've been seeing a physiotherapist for the past little while with some shoulder issues and she suggested that I take a 2 week holiday from knitting. I realized that the main problem was probably not the knitting when my immediate internal response was: "Thank God she didn't say 2 weeks away from the computer." But I digress.

I'm a good girl and always do what I'm told, so I've mostly put away the needles for a while and last weekend did some work assembing this sampler afghan that we're designing for the store. I realized very soon that it's been years since I've worked on a blanket. I had forgotten how much I like it and I really believe that it's one of the most therapeutic types of knitting. When my partner and I first got together back in the late '70's, he was in BC and I was in Montreal for the first 6 months. During those months we racked up some heavy phone bills, but on the + side, I completed 5 full sized afghans during that same time. (Would you call that therapeutically obsessed?)

At the end of Dec. the Ottawa Citizen featured an article about a group of hockey moms who have put their arena time to making blankets for Project Linus, an organization that many of you know that we coordinate locally, which provides hand made blankets for kids who are going through a difficult time. Then within a week, we received a flyer from Bernat Yarns offering support for Project Linus and free pattens for other fundraisers.

Project Linus, in addition to doing wonderful work, is one of the best organizations that I've ever been associated with. From their beginnings in 1995 it grew so much in the first year with chapters world wide that an executive decision was made that they would either have to expand to include paid staff...or...they could simply trust the goodness and integrity of the people involved and completely let go of the reins of power. Having chosen the latter way, each chapter is loosely associated with the larger organized non-organization, meaning that there is support but absolutely no paper work, no reporting, only proper and important work getting blankets to the kids who need them.

WOOL-TYME Kingston has been involved since 1996 and to date, I think we have distributed, through the generosity of our customers, over 3 000 blankets in the Kingston area, extending to Napanee and Gananoque.

That being said, if any of you know of a local group who works with kids when they are going through a difficult time in their lives and would like to have some blankets to help make their time easier, please let us know. We'd be glad to share what we have with you.

So grap your needles or hook and work up a blankie for yourself or someone you love. (And considering that we just found out about 2 family weddings coming up this summer, I'm sure I'll be taking my own advice in the near future...as soon as I'm off the disabled list.)