Repairs - One of the things that I learned from my store. 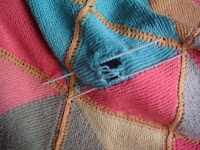 We just received our first shipment of the Yarn Harlot's new book "Things I Learned from Knitting..." and I've been really enjoying it. And it got me thinking about some of the skills that I've learned, not necessarily from knitting but from running a wool store.

This is a picture of a beautiful old afghan that has been brought in for repairs. The knitter is now 99 years old and is still alive although, sadly no longer knitting. There are 77 garter stitch squares made of what appears to be a fine 4ply yarn (26sts over 4") in many bright colours, done on fine needles. Now that is one honking pile of knit stitches, and each one of them perfectly formed with precise tension. Someone had to be unbelievably persistent and dedicated to the cause. It really is something and well worth preserving.

The picture shows the worst of 3 holes. As it is here, the hole is actually 1/2 of the size that it originally was. The lower needle holding the dropped stitches is actually at the line where the pink and the blue meet. and I'll be reforming the stitches up the rows to meet the other needle. And all of this happened because one little stitch in the centre gave way and started unraveling sideways and then in both directions outward.

When people bring their prized knitted posessions in to be repaired, I often have to tell them that there is only so much that we can do; it will never be perfect again but I'll do my best. We can however assure them that it will be secure and nice and usable. But the reality is that if we can't do anything with it, the option for most people is often the garbage bin. Because I'm one of the few people in the city who has had the opportunity to play with these disasters with which we have nothing to lose, I've been able to learn a lot about the construction of knitting and what works best to camouflage the least and the worst of the problems. But most of all, what I've learned is that there is nothing like having nothing to lose to make one bold in looking for solutions. Sometimes it works, sometimes they end up in the dust bin. But at least I've learned something for the next problem that comes through the door.
Posted by Now: KnitTraders of Kingston at 12:33 p.m. No comments: