You know you're in the right business when... 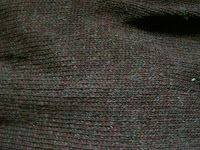 There are times when I have to wonder about myself. But then again, who is going to look the gift horse of a job that still thrills me with something as simple as an invisible seam...every day.


I love knitting. Not so much the actual formulation of each individual stitch, as I've done more than my share of that over the years, but I love what the knitted fabric can do, and what we can do with knitted fabric. Consequently, I often will reserve interesting finishing and repair jobs for myself, just for the enjoyment of it and the learning factor.


Earlier in the week I was putting together a sweater made of Sirdar's YoYo boucle yarn, and was once again struck by how fun it is to pull the strand of yarn that I had used to sew the seam, and PRESTO! It's invisible!!


I've been doing this regularly for 13 years now, you would think that I'd get used to the fact that the mattress stitch actually works and easily creates a seam that is virtually undetectable to the eye. But although I know what to expect, I still love it. I'm like a new baker whose bread actually rises in the oven, or a kid who makes 5 out of 5 succesful jump shots in the basket. I'm amazed and excited.


Okay, now that I've embarassed myself with my confession, I stand behind the belief that this is the one area where I've been blessed with a perpetual "beginner's mind", which continually delights in the marvel of life (in the knitting lane, at least). And how lucky am I that it's part of what I do to make a living! 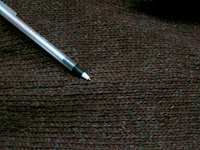 But look for yourself. Can you see the seam on the side of my husband's sweater in the picture above. Isn't that cool? Here is a picture with the pen pointing to the seam.


SO, earlier in the week when I was marvelling at the simplicity of my thrill reflex, and thinking that it would be something that I'd like to share in the blog, I also remembered that we have a class scheduled on Sat. Dec. 4th, to give people a chance to learn this great little finishing trick.


Call early to sign up if you're interested in joining me, as there is a bit of homework needed (just a few little squares to practice on.)


The best thing that I can say for the mattress stitch is how many beginner knitters who have learned the technique with me and used it on their first sweater come back to tell me that co-workers, moms, grandmothers, and other knitting friends of theirs remark immediately on the finishing of the sweater. "How did you do THAT?" is the most common comment they've reported with great pride. And to think it's so easy.
Posted by Now: KnitTraders of Kingston at 11:00 a.m. No comments: