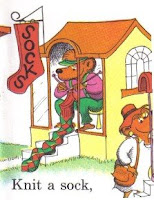 I don't often get a chance to sit down and read the paper, but yesterday I found myself having a bowl of soup in a coffee shop that had a copy of the Toronto Star. I never cease to be amazed at how matters of interest can find me. First I read an article about the Acadians in Nova Scotia (and those of you who heard about my trip to the Cheticamp rug hooking museum last fall will know that there in lies my own heritage.) Secondly, I saw a beautiful pair of hand knit socks on the front page of the Living Section. These socks were advertising the "Sock Wars" competition, which is beginning world wide today . It was started a couple of years ago by Julie Gardner, a freelance TV and film manager in Belfast. You can read more about it at http://www.sock-wars.com/
I have my own sock issue that is kind of nice. There is in fact nothing like exposing oneself in public to have the universe change the way you think things have to be.

I recently posted that it is the plight of the LYS owner to be doomed to knit single socks as we need them for display but don't have the time to put into making the second one as there is always something else that needs to be knitted. Well after that confession, for some reason I just couldn't let go of this other half ball of Primo sock yarn and as you can see, I do have the second one on it's way to completion. (It occurred to me as I was taking the picture that the presence of the first/completed sock beside the in-progress one was a bit like a photo of a kidnap victim holding up a current newspaper to prove the date. The completed sock proves that this is a current picture and not a photo of the 1st sock in progress. How sick my mind can be.)
And talking about newspaper articles...when I returned from my lunch of reading the Toronto Star, to find a copy of the front page of the Kingston Whig-Standard on my desk, in which was featured a picture of the shearing operation going on at Topsy Farms over on Amherst Island. Funny to think that those curly locks might soon be on our shelves in their lovely blue heather or green tweed 2ply fine knitting yarn.
The story reminded me that a few years ago we went over to visit the nice folks over at Topsy Farms about this time of the year when there about 1 000 new lambs in the field. Now that was a sight that over-extended the cuteness quotient!

And finally, while we are on cute, we've had quite a few comments about "Borka", the book about the featherless gosling mentioned in WOOL-TYME Kingston's May Newsletter. One of our readers did a bit of research and found out that there is a 40th anniversary edition of the book that is available through Chapters/Indigo. Borka has been quite a minor celebrity in the store with the most comments of any feature in quite a few months.
Happy Mother's Day. Happy Sock Knitting!
Posted by Now: KnitTraders of Kingston at 8:08 a.m. No comments: