Knitting in public for a week.

During the week of June 12th to the 19th I chose to conduct my own little knitting social experiment in conjunction with World Wide Knitting Day/Week. It was a great experience in that it gave me a chance to just sit and observe the world for 1/2 hour each day while I also got to work on my lovely blue sock (made from left overs of On Your Toes Bamboo sock yarn and Tofutsies sock yarn).

Day 1 was at the very beginning of the World Cup and was the day when the UK and the US would be facing off again for the first time in something like 50 years. I could hear the hoopla coming from Jakk Tuesdays, the Sports Bar next to the store, while the Sock in a Day class was going on, so I was really looking forward to seeing the 2nd half of the game while working on my sock. Well... BORING! Obviously all the excitement took place in the 1st half when we could hear everyone cheering. Never mind...I did notice that when it's the 3rd game of the World Cup of soccer, and you're knitting in a sports bar - NO ONE CARES. 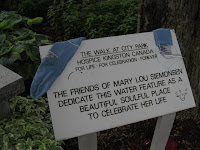 The next day I went to City Park at the corner by Bagot St. We lived about a block from this park when we first moved to Kingston about 25 years ago. How lovely to dig up the memories of the swings on a summer's night, with my much younger oldest daughter. I sat in the "Walk at City Park", a memorial garden sponsored by Hospice Kingston, offering a lovely treed shelter and fountain, surrounded by bricks, benches and other features dedicated to loved ones who have passed on.
The bench across from me said: "For the enjoyment of all, from the dog friends of Grace Howard." How sweet of dear Grace's canine friends. At my feet was a brick that mentioned that Robert (Bob) Snider had passed away on Sept. 12th, 2001. Not only is this the day after such a memorable date in North American history, it was also the day that Ernie Coombs, alias Mr Dressup, died. 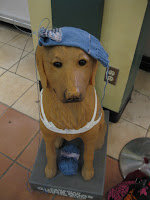 Day 3 had me knitting at Loblaws after picking up some groceries where, continuing with the dog theme, I found this fellow to pose with my sock. 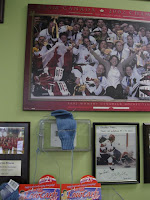 Day 4 I went to Progress Fitness (and I blush as it was the first time in about 3 months that I'd made it to the gym. 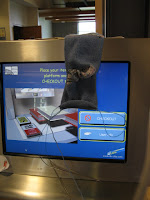 Day 5 which was Thursday I like to go to the library for an hour or so before going back to the store to teach on Thurs. evening and Sockie came with me. 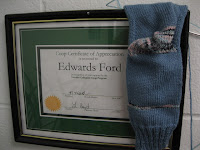 The next day I had to have the oil changed in my car and I sat in the waiting room at Edwards Ford. 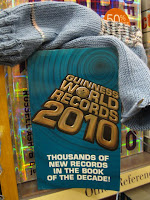 On the last day, Saturday the 19th, I wanted to do something in solidarity with the knitters who were gathering in Cambridge Ontario to make an attempt to beat the Guinness World Record for the greatest number of knitters gathered together plying their craft. So off I went to Chapters and propped the sock up on an abbreviated edition of the record book that didn't seem to have much information at all about knitting except that the fastest knitter was from the Netherlands and the longest needles were BIG (I forget the exact dimensions).

So what did I learn from this experiment?

I observed that the only place that anyone even gave me a second glance was in the park, and there I actually had 2 people who stopped to talk to me, both of who had fond memories of mothers knitting in their past.

I've tried to come up with some reason why this was the only place where my knitting would attract any attention, and I believe that it has a lot more to do with the frame of mind of the people passing by than anything else. Most of these other venues had people who were there for their own specific purpose, and that it would take an awfully strange activity indeed to keep them from completing their task in the most efficient manner possible.

I must note that the park was also the only place where I actually noticed that people were less prone to scowl. Even at the library, the determination on the faces of the patrons surprised me as they focused on the search at hand. To me, it says a lot about the value of our green spaces and how we should maybe take the time to enjoy them a bit more.

Posted by Now: KnitTraders of Kingston at 7:34 p.m. No comments: