Only in Anchorage, Alaska you say?...Pity.

This is an example of why I now love the Globe and Mail newspaper.
A couple of years ago we received a call from the subscription office at the Globe and Mail in Toronto, extending an offer that we couldn't refuse. They were reaching out to small businesses as a way to increase their distribution numbers and looking for a wider readership per newspaper delivered. Since then, we've been getting the paper at the store every weekday morning. By the time I get in to work, bring the paper home and get to read it the following morning, most of what's on the front page is old news but there's still lots to read that is current.
One of my favourite features is a daily photo pick (backed up by on-line notes of why the photo editors picked that particular picture). Mutton chops, pictured here, was Wednesday's feature that I had to share with you. Don't you love the kids face? Can't you just picture Sarah P. off to the side?
Here's another picture that I have spoken of previously in this blog but until recently Icouldn't 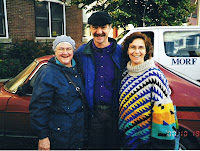 find. Well here it is - a picture from October of 2000. That's me with my "little" brother and my Mom. I'm wearing a Kaffe Fassett inspired sweater that I made during the 1994 Winter Olympics. (It just goes to prove that knitting Olympics was around long before the Yarn Harlot so cleverly turned the idea into an international avalanche of mutual supporters) I remember one of the actual events as my 3 1/2 year old commented while she watched Tonya Harding performing one of her figure skating routines, that she didn't like her, as she pointed to the television. "She looks mean." From the mouths of babes... You will remember Tonya resorted to some pretty nasty tactics to lessen the competition from her team mate Nancy Kerrigan.

Needless to say that Tonya and Nancy's spat has little to do with my sweater, or does it? It is a rather strident looking garment, don't you think?

In my defense, I remember that we didn't have a real yarn store in Cornwall, where we were living at the time and I had to resort to cobbling together yarns and colours that were available to me in a chunky weight. I also remember that winter I was feeling a need for BRIGHT colours as the winter dragged on. In hind sight, I believe that one of the reasons that I wore the sweater sparingly over the years was that I had to feel in a very out-going mood to sport it as it was the kind of garment that had people looking at you.

You will notice that my mild case of ADD is apparent in that I seldom knit the sleeves to match the body of a sweater in those days. My point being that I was usually bored with the body pattern and wanted something easier and/or more interesting for the next part.

As for fit, well, we did like our clothes baggy in those days, but that one was a bit excessive. I loved the coziness of it, but I do believe that it measured out at 62" chest. (I filled out about 40" of it.) 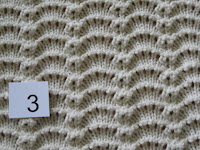 As for what I've been doing lately in knitting, I'm having a great time assembling first the actual afghan for our upcoming BLOCK AFGHAN PROJECT, which is going to be a sort of on-going Knit Along, featuring a series of knitted squares of different stitch patterns. The squares were knit by a couple of my faithful knitters, then I got to put it all together...all 25 squares. I love it.

The kit will be available (for delivery beginning Sept 1st) in 3 sizes from shawl/baby blanket dimensions to a full 25 square double bed size. It can also be done in CASCADE 220- pure wool, in Cascade's brand new PACIFIC 40-60 wool/acrylic blend (which they say absolutely cannot pill), or in Patons DECOR.

It's a big project - even now that the assembly is complete I'm working at putting the pattern booklets together and organizing the promotion for it, but this is all part of what I really enjoy of having the yarn store (and a good example of what I'm doing when you don't see me in the store.)
Posted by Now: KnitTraders of Kingston at 7:47 a.m. 1 comment: