A big walk down memory lane.

Yesterday I got to take the day in Duncan and area where we lived when we were first married over 30 years ago. This is the 1st hou 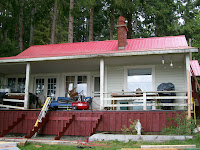 se where we lived: it was a camp that was owned by the Diocese of Victoria on Shawnigan Lake but because of size and liability issues, it was no longer being used as a kids' camp.
Imagine my surprise to see that everything was exactly the same...30 years later, including the young carpenter who was working on the main house, who reminded me so much of my husband, apprentice that he was in those days and who was probably the last person to have worked on those front stairs. 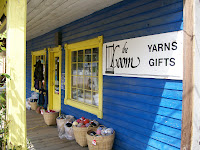 Then up the highway I went to WhippleTree Junction, a wild west era shopping mall...actual buildings from the turn of the last century and before were transported to a site just south of Duncan and were turned into retail space. At that location is The Loom, which is one of the knitting stores where I began my knitting career when we lived here, making samples for the store. It seems a lot smaller than I remembered it, but just as vibrant.
The irony is that my husband's cousin Ronald Woodall, whom we hav

e never met, is the artist who created these lovely pieces of "disappearing architecture", which includes a piece entitled "Old Chinatown" I believe (bottom left), which is how the stores at WhippleTree originally looked before they got gussied up.
Later in the day, I got lost and literally drove into (the parking lot of ) a lovely little case of serendipity. This is a picture of Andrew who works at Glenora Farms' Weavery. Link here to their site to read more about this wonderful community just south of Duncan BC. The Glenora Farm community refers to itself as: "A place where special needs are met..." An 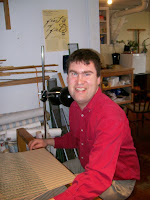 drew is an amazing weaver and I bought 3 of his cotton and linen tea towels. His fine wool scarves are also greatly prized. He told me with great pride that he loves to bake too and often makes his special lemon loaf which is sold at the Glenora general store. It's wonderful to think that lovely people like Andrew have found a warm place to live and be productive, within the confines of their special needs. Isn't it fun to get lost?
Posted by Now: KnitTraders of Kingston at 1:04 p.m. 1 comment: