Victoria is just as beautiful as ever. For Mothers' Day, my brother, Anthony, took me to Hatley Castle, now part of Royal Roads University. There was a craft fair on the front lawn and the castle and its gardens were open to the public. Absolutely amazing.

While we were there we met Wendy Mitchell of Sea Bluff Farms in Metchosin, near Victoria. Wendy is the creator of Barbie here, she is a papier mache sheep who has been dressed in a cardi and balaclava that were knit by Wendy of locally grown sheep's fleece that she sp 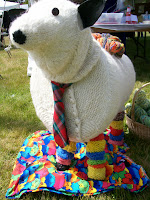 un. Wendy had called her creation Barbie and one of the guests at the castle suggested that Barbie could be Barbie Dollie in honour of Dollie, the cloned sheep.

Wendy is hoping to encourage knitters from her local fibre arts guild and crafters across Canada to donate knitted clothes to Barbie Dollie's wardrobe. You will notice the colourful leg warmers that she now is wearing but she could certainly use a hat or scarf or tail warmer, or shawl from other parts of Canada. 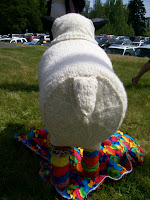 If anyone would like to help clothe Barbie Dollie, please contact Wendy at wendyncmitchell@shaw.ca
P.S. A hat to fit a medium adult or large sized child would suit the bill perfectly.
Posted by Now: KnitTraders of Kingston at 2:45 p.m. No comments: