Day 2 on the train

We've arrived early in Winnipeg and it's one of the few times that I'll have internet access along the trip so I'm making the most of it.

For the full 16 hours of daylight time we rode through deep forest that I'm sure no amount of the most super powered insect repellent could protect one from during the buggy season.

I've driven across Canada several times and have taught Canadian Geography and neither experience prepared me for the amazing vastness of the wilderness in northern Ontario. Aside from the occasional dirt road and a few villages with nothing higher than a 2 storey dwelling, there is very little of human intervention to be seen from the train for hours on end.

When people asked me why I didn't just fly to Victoria if I wanted to go to the West Coast, I told them that I wanted a working vacation, and that this would be like a cottage that could also move me to where I wanted to go. After a day, I realize that a better comparison is like being at a vacation resort with really nice staff to help out and lots of interesting people to meet. And sitting on the "porch" of my chalet is like watching a really long episode of National Geographic: Astounding for its magnitude and beauty when you glance up from your work, but you wouldn't want to have to pay constant attention to it for all 16 daylight hours. 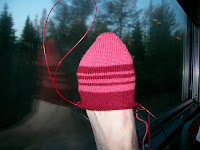 Here is a picture of the socks that I was working on yesterday, and that's the boreal forest in the background. I actually started the toe at home as I'm not ultra confident in toe-up techniques and I didn't want to have the stress of trying to get it right enough to give as a gift when I'm working on a moving train.
As it turned out, it was a good thing that I did that as it took me 3 tries to get it right-ish. 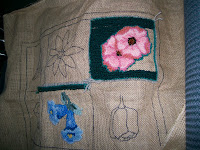 lk of my crafting time yesterday was spent on the rug hooking project that I've designed. I had wanted to learn more about shading with yarns, so I created a mosaic of 9 "tiles", each containing a flower from The Rug Hookers Bible. I did the blue one at home as a test run to see if it would be a feasible project. The wild roses I did yesterday. I'm going to try and complete the majority one flower each day that I'm on the train. I'll keep you posted.
Posted by Now: KnitTraders of Kingston at 9:10 a.m. 1 comment: