My Gift to You

We have a satelite dish at home and I often hear people asking how it's possible to have reception of 200+ channels and there's still nothing on TV.

Lately, I've taken this on as a challenge. Believing that there has to be something interesting or worthwhile on at any given point of the day, I'm willing to invest a few minutes to find it.

A few weeks ago on the Documentary channel I came across a great 65 minute film called LAUGHOLOGY which truly changed my life (for the time being anyway). 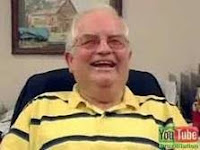 ntagious it can be. The film brings us through many segments and stories, but my favourite part was the when we are introduced to Doug Collins, the man with the most contagious laugh in the world. This title apparently came about when Doug was randomly selected to take part in a segment of the Comedy Barn, and to the host's helpless surprise, Doug actually stole the show by doing nothing more than lauging...And the rest is history in that the YouTube segment called Dad at the Comedy Barn now has been seen by 21,035,246 viewers and with good reason.
I can't begin to count how many hysterical video doors are opened by Googling Doug Collins laughman.
And what a joy it is to spend some time with Doug. Not only is his laugh unstoppable, but he seems like such a genuinely nice man that you want to visit him often, and you always come away feeling refreshed and joyful.
My wish for each of you at this hectic time of the year is that you receive and give in turn all the benefits that the joy of a great bellylaugh can bring. And give yourself the gift of spending a few minutes with Doug. You'll not regret it.
Posted by Now: KnitTraders of Kingston at 2:51 p.m. No comments:

A couple of distractions to check out.

So have you ever noticed that the crazier the pace of our lives becomes, the more we look around for things to distract us from the very tasks that we should get done to keep things from being so crazy??? I prefer to think of this as a simple trait of human nature and not necessarily a bad thing. After all, this nose to the grindstone is quite overrated in my opinion. 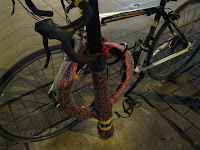 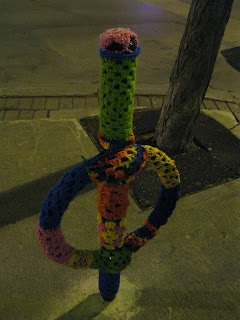 That being said, if you're looking for a few distractions to break from the pace in these last few weeks before the Holidays, here are a few that I'd suggest:
Wander through Downtown Kingston where there's a special treat awaiting your fibre sensibilities in front of Tara Foods/Vandervoort's Hardware on lower Princess St. Fun loving crocheters have decorated some of the bike racks there with colourful swatches of Granny Squares.
And to show that they aren't ashamed of their stitching obsession, there's even a little card attached to each asking you to send fan email messages to Outlaw Wool Lovers.
It's fun to think of a little bit of subversive stitching going on right here in our own backyard.

Or you might want a bit of diversion delivered to you through your computer:
A few weeks ago, we received the special 100th issue of Knitters Magazine, also celebrating their parent company, XRX's 26th year in business. This double issue of the magazine contains a full 50 patterns and is a great buy, but the cool news is that they are actually making this edition available for free to any Mac, PC or iPad user. Link here to receive your free digital copy of the magazine and spend a few relaxing hours dreaming about projects that you can make for YOU after the holiday rush is over.

Or if a little fun knitting is the sort of distraction that you're looking for, what do you think of this great little Holiday knitting project? Isn't it the cutest, although I'm not sure that the avian world would actually classify this little fellow as a partridge to go along with the pear but it would be fun to put on the tree anyway.
Find the free pattern to make these lovely ornaments in Patons on line newsletter.
Meanwhile, I'm off to leaf through a couple of new rug hooking books that I just picked up...and perhaps sneek a peak at the Julia Child/Jacques Pepin cookbook that Alana brought in for me to browse through. We might either have Blanquette de Veau with Pomme de Terre Dauphinoises or grilled cheese sandwiches for supper, depending on how distracted I actually get.
Posted by Now: KnitTraders of Kingston at 3:00 p.m. No comments:

In the 2 days since the newsletter went out...

It's good to have this edition of the newsletter "put to bed" and I can only say that much as I enjoy writing it, I'm certainly glad that it's a monthly deadline that I have set myself and not a weekly one. By the way if you aren't signed up to receive it regularly through email, you should be. 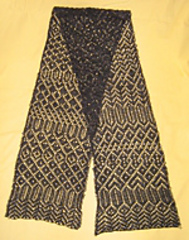 But as life would have it, no sooner did I hit the send button but I received an email from a customer telling me about her participation in the Ravelry Advent Lace project. What a great idea: you access a different part of a lace scarf pattern for each of the 24 days before Christmas. When I went on line to check this out I was surprised to find that there are actually 2 such projects through Ravelry. Both seem to be from German knitters who appear to be equal opportunity designers, recognizing that the world of lace knitters is divided very strongly between the chart people and the written instruction group.

The one pictured here is by Unikatissima and the other one, cleverly hiding any photographic representation of the finished project is by Kristen Benecken. Now I'm the first to admit that I don't have the concentrated time to do a lot of lace knitting but I was pretty awestruck at the concept that a person on this planet would have the time during the month of December to accomplish each of the 24 sections on each of the next 24 days. What a challenge it would be and it will be fun to check in on the groups to see how people are keeping up with the pace. They don't even have hours of dedicated television watching to fill as we do during the Knitting Olympics.

We've had a good response so far to our first Knit-Along, scheduled for Feb. 2011 when we will knit the wonderfully versatile February Lady Sweater, including some responses from customers outside of our geographical area who want to participate on-line. This could be really fun. If you would like to learn more, link here. 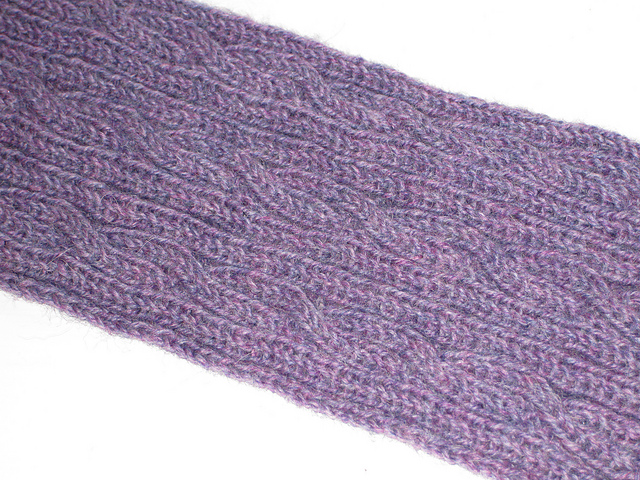 Also, in that same Inbox batch of messages, I got one from Elizabeth McCarten letting me know that she had a new free download through Ravelry of a reversible cable scarf called Tumnus, a lovely design to try for someone special. By the way, everyone should check out Elizabeth's blog to see her wonderful photos of the city as seen through the eye of an artist discovering her new surroundings. If you are a Kingstonian you'll see the common through a fresh set of eyes. If you're from away, you'll be seduced to visit our great downtown area.
Posted by Now: KnitTraders of Kingston at 2:21 p.m. No comments: