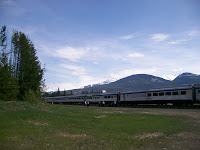 Heading back east again, with a stop over for a couple of days in Winnipeg.


This is the train as we stop in Blue River B.C. for a smoke break/fresh air break. How beautiful this little town is. This is very long for a passenger train (about 20 cars) as we pick up 2 tour groups in Jasper. By the way, Blue River is home of the oldest store in Western Canada. It's just a little storey and a half frame house that now sports a somewhat weathered sign that says "Janie's Convenience Store." 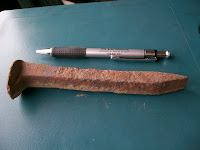 While stopped here, I found this spike. I'm not sure why I decided to bring it with me, but it just seemed like a fitting souvenir of this wonderful trip, to have a real piece of the railroad...it just looks so old!

The time on the train really does remind me of a lazy visit to a cottage. You mozey along doing whatever you feel like doing...reading for a bit, napping for a bit, going to the dome car to enjoy the scenery for a bit, playing cards or Scrabble or just socializing with others in the club car while you feel like it. We had a lovely little passenger on this trip named Coco. She's just 3 months old and was on a trip to visit her great grandmother. Coco's mom was more than happy for any help and so we all got to play pass the baby. 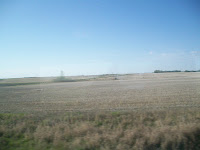 On the trip west, you miss out on the true visions of the prairies as the train goes through this area at night. There aren't nearly as many of these great horizon views as you get on the Trans Canada Hwy further south, but just enough to remind you of the effort that the early settlers must have put out to claim this land. I had lunch with a couple who had come from Britain 50 years ago and settled in Kamloops. They were struck by the stories of the trains of war brides who came through this territory after the war. I would think that many of those young women might have been horrified at the thought of the remoteness that faced them.

So, after day 2 on the train, here is the rug hooking sampler that I've been working on. Some of the same passengers from my trip west are back on the this train and recognize me from our trip out because of the rug. 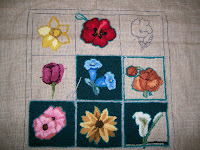 By the way, I ran into a customer of mine who had moved last year to Edmonton and was coming back east for a family get together. Also played Scrabble with a lady from Kingston with whom I share a dear mutual friend. It is a small world.
Now in Winnipeg, I'm looking forward to a visit in Neil Young/ the Guess Who territory. Although it would appear that Winnipeg has another reason for being famous that isn't so great: Coco's mom says that it's the home of the largest swarms of mosquitos in the world (or so she remembers from her childhood). I don't do bugs well. I'm hoping that it's too hot for them...we're expecting 30 degrees tomorrow.
Posted by Now: KnitTraders of Kingston at 10:59 p.m. No comments: