The Forest and the trees.

Still cold but everyone keeps saying: "Don't worry. It'll warm up before the weekend." Small comfort, but it is getting better - lots of sunshine and down to 2 jackets from yesterday's 3. 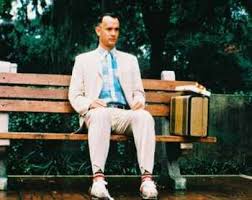 orning. On the tour we got to see the bench where Forest Gump sat throughout the telling of his story during the whole movie. (One of my favourite films!) The funny thing is that I wasn't able to recognize the place as it is supposed to be a bus stop presumably facing a street where a bus would travel, but it's actually a bench that faces in towards the centre of a beautiful park square (one of 21- squares that is, not benches, in the city).
We also heard that ALL of the trees in Savannah were destroyed during the Civil war, and that our tour guide's "Grandaddy" was the first commisioner of trees and was in charge of planning and executing the reforestation of the entire city. What a success story as the "lav oak 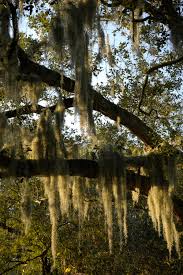 " trees are everywhere and are an amazing symbol of rebirth. (It wasn't until I saw a plaque that described the trees that I realized that they were called "live" oaks.) Savannah is also supposed to be the most haunted city in America. There are several theories as to why this is, but I believe that it has something to do with the "Spanish moss" seen on these trees that truly makes every street look like it is being flown over by a flock of ghosts with hanging gauzy robes. Who could help but be prone to believing in ghosts, living in such an environment. Our tour guide did say that people here all like the Spanish moss as it creates more shade. I imagine that for a good part of the year shade is an important factor... not yesterday or today!

This is one of the yarn stores here in town: Wild Fibre. (Both knitting stores are within a couple of blocks of each other. I'll be seeing the other one tomorrow.) Lovely store with lots of space and a sofa for visiting knitters to sit on.
I noticed that they had a sign asking for knitters to work on "student projects". I asked what this meant and the lady explained that Savannah is home to one of the best and largest schools of Art and Design in North America and many of the students in the fashion design area need pieces to be knitted for their design collections - what a great job, but it certainly would require an interesting set of knitting skills.
Great lunch at "Mrs Wilkes Boarding House", listed as one of the "1000 Things to see Before You Die". Only 999 to go!
Posted by Now: KnitTraders of Kingston at 8:21 p.m. No comments: